Vertebrates have two strategies of thermoregulation: thermoconformity (lack of behavioral regulation) and accurate thermoregulation (Huey & Slatkin, 1976). In reptiles, the thermoregulation process is essential to understand the ecology and distribution of reptiles (Huey, 1982; Seebacher & Shine, 2004). Environmental temperature is well known to have profound effects on physiological processes, predominantly in ectotherms because they directly influence their body temperature (Hill, 1980), resulting in considerable energy savings as compared with homeotherms. Ectotherms do not have thermal imbalances between their body temperature and that of the environment, but their cells, tissues, and organs create changes in their internal temperature and produce metabolic heat in low proportions; therefore, to determine heat exchange with the environment, it is most important to differentiate body heat from metabolic heat production. Furthermore, reptiles can nevertheless regulate somewhat their body temperature by changing activity, location and/or posture (Eckert, 1990).

The rattlesnake Crotalus catalinensis is an endemic snake from Santa Catalina Island in the Gulf of California, Mexico. They are a part of the Viperidae family; their average size is 689 mm (snout-vent length). The coloration considered in those snakes is a light gray tone (clear) and there are also some brown ones (dark), as described by (Beaman & Wong, 2001). They have arboreal habits but use vegetation only occasionally, and males are slightly larger than females (Beaman & Wong, 2001; Campbell & Lamar, 1989; Grismer, 2002; Martins, Arnaud & Murillo, 2008). This is a critically endangered species and is included in the Official Mexican Norm 059-SEMARNAT-2010 (Diario Oficial de la Federación [DOF], 2010) under the category of threatened species; it is also included in the Red List of the International Union for Conservation of Nature (IUCN), under the Critically Endangered species category (Ávila-Villegas, Martins & Arnaud, 2007).

The behavior of Crotalus catalinensis is interesting since, apparently, they do not hibernate, and there is no information about their thermal ecology. The aim of this study was to identify the body temperature of the rattlesnake C. catalinensis and its relationship between environmental and surface temperature throughout different periods of the year. 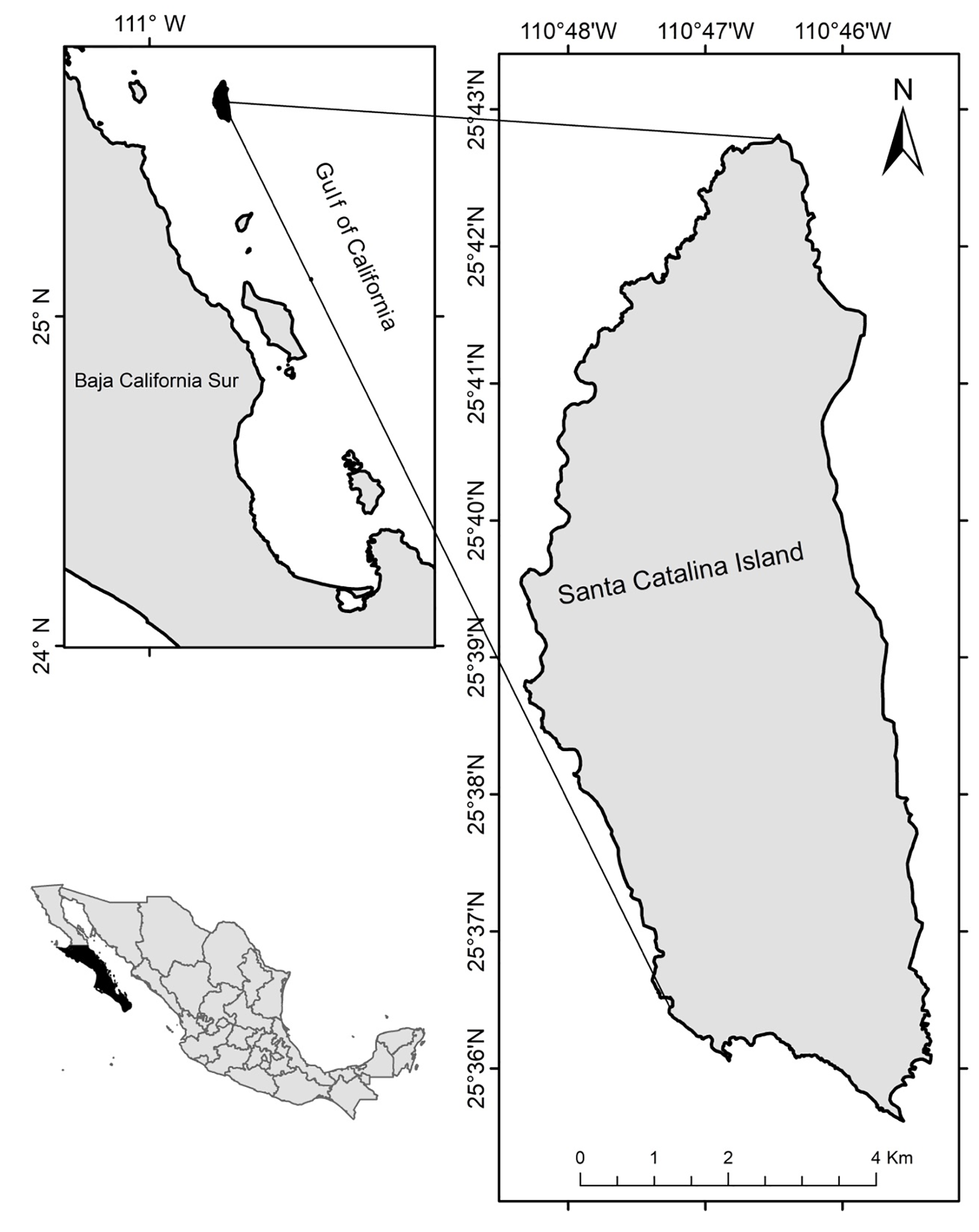 Santa Catalina Island in the Gulf of California, Mexico.
Source: Author's own elaboration.

Four samplings were done in Santa Catalina Island during 2007, corresponding to the four seasons of the year, March, May, September, November, but the samplings were divided by dry season (March-May) and rainy season (September-November).

The search for rattlesnakes was performed one hour before nightfall and until one hour before midnight (1800 h - 2300 h). They were caught and held with herpetological tweezers for their manipulation. The rattlesnakes that were present in the different seasons (dry and rainy) were documented, and their sex was determined by a "cloacal test" (Schaefer, 1934). The snake's body temperature (Tc) data were taken by averaging five measurements and five of the substrate temperatures (Ts). Also, measures were the air temperature (Ta), the relative humidity (HR), measured with a hygro-thermometer (Skymate-Weather Meter) 1 m above the ground, soil temperature (To) in the shade (Tshade) and in the sun (Tsun) measured with a digital infrared thermometer (Raytek-Fluke 62-MAX).

To collect the data of operative temperature, defined as temperature of an inanimate object of zero heat capacity with the same size, shape and radiative properties as an animal exposed to the same microclimate (Bakken & Gates, 1975), two cylindrical cooper models were used, whose dimensions were similar to those used with adult snakes. These models were placed on the ground with the same orientation with respect to sunrise; on the ground under vegetation cover (in the shade) and without plant cover (sunny all the time), the readings were recorded each hour for a period of 24 h, during each sampling period.

A contingency table was used to record the seasonal variation of the rattlesnake’s temperature. The substrate and environmental temperature were compared with each other, and frequency graphs were generated to analyze trends between these temperatures.

An analysis of covariance (Anova) was used to identify whether there were significant differences between body temperature of males as compared to females as well as the differences between dark and light color rattlesnakes. A controlled variance of the most correlated changeable body temperature was applied and the value of significance for all statistical tests was p < 0.05 (Sokal & Rohlf, 1995).

Four trends were observed between environmental temperature and relative substrate around 17 °C, 22 °C, 25 °C and 30 °C was reflected in each of the sampled seasons (figure 3). 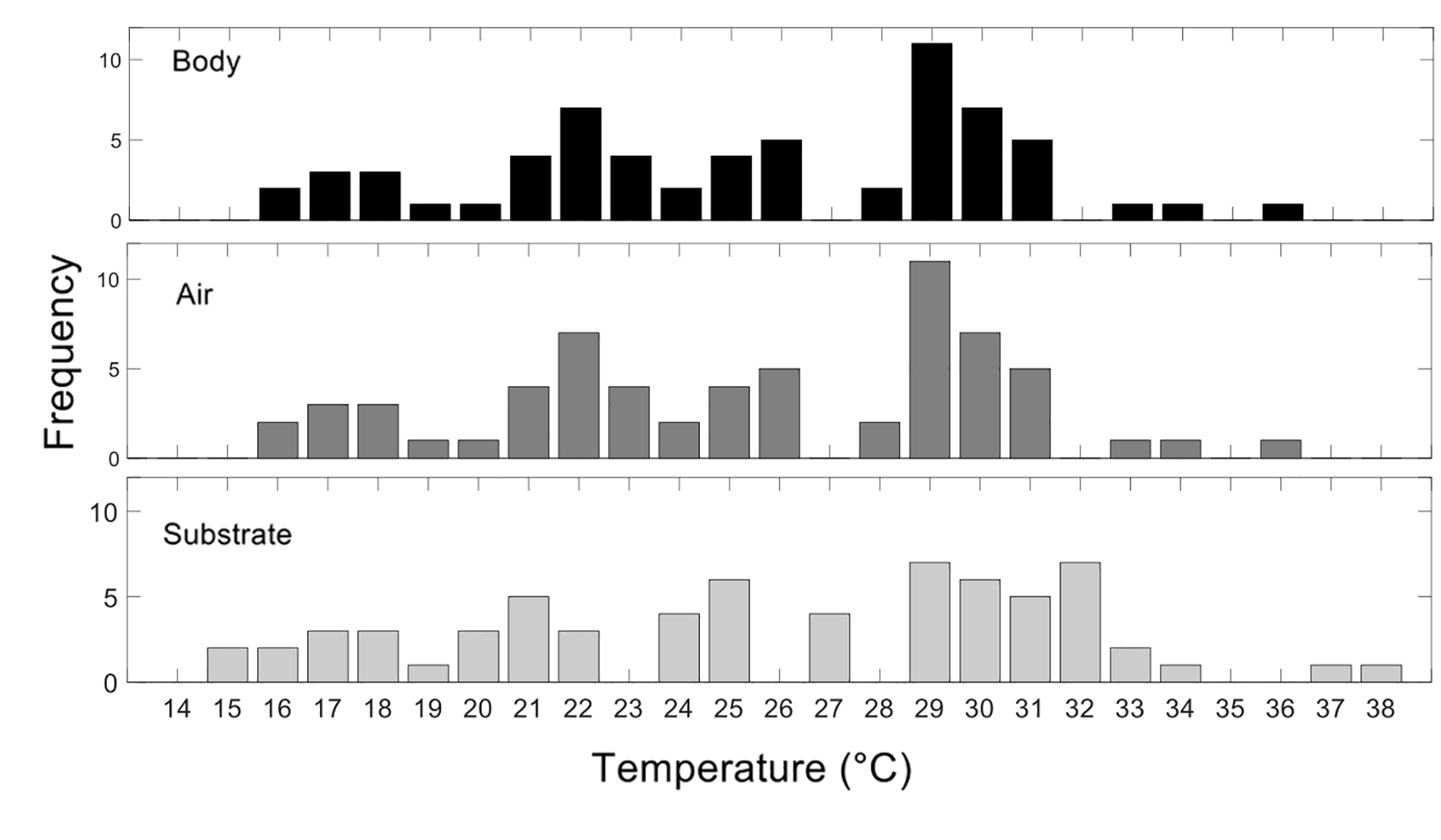 Frequencies in rattlesnake body, air and substrate temperature during the seasons of the year.
Source: Author's own elaboration. 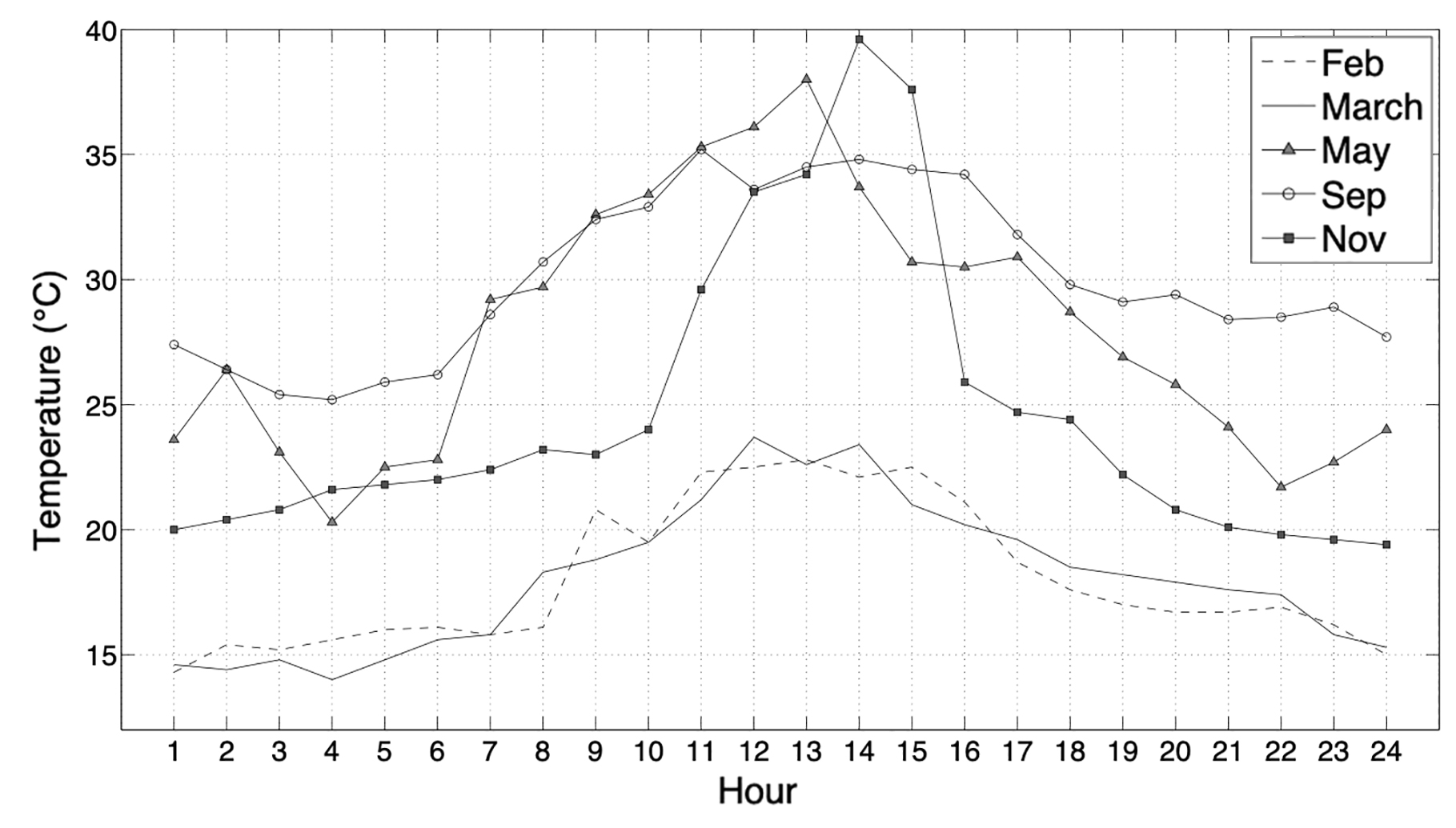 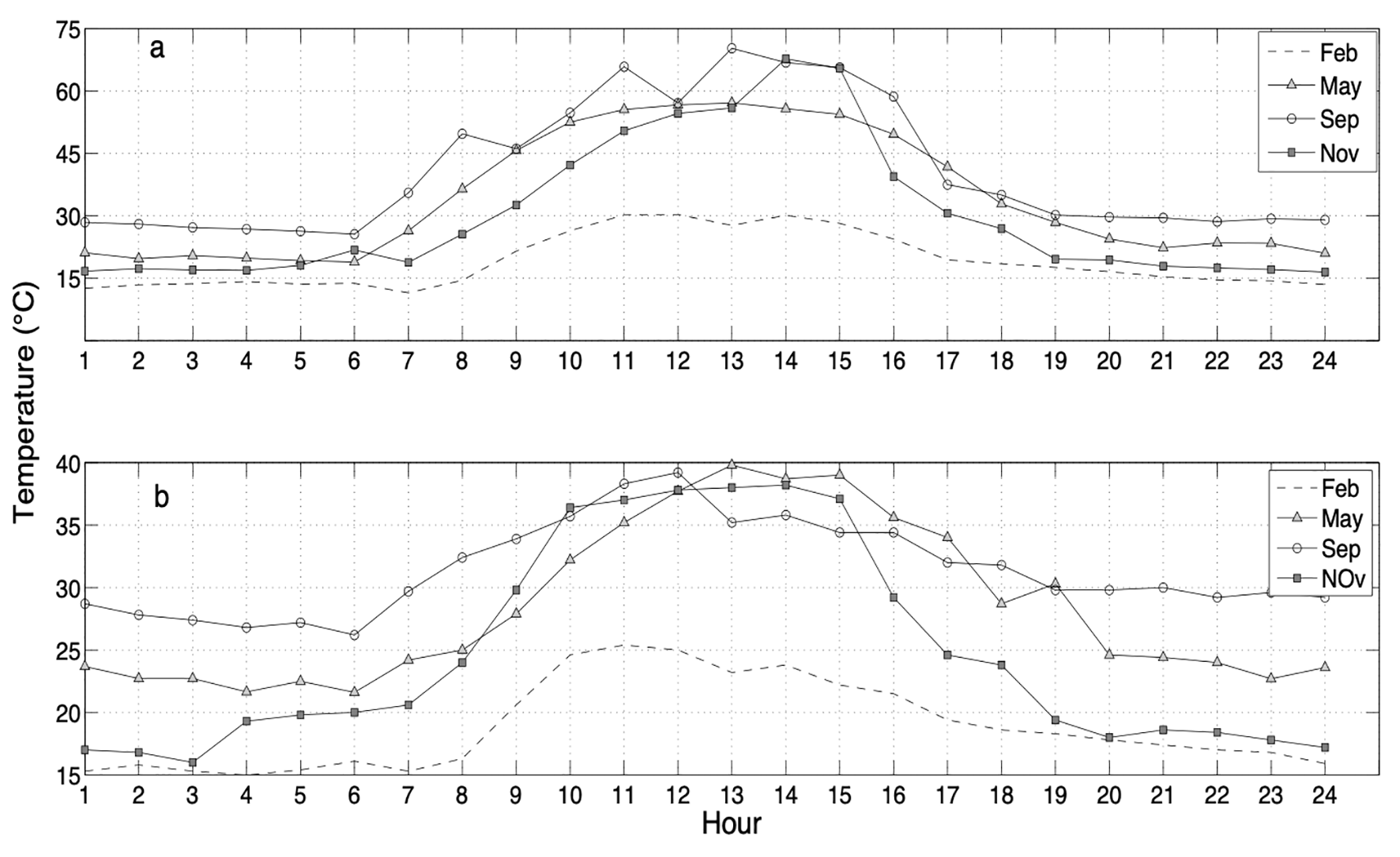 The use of a habitat by a species can vary depending on its body size, color, and sex (Shine, Shine & Shine, 2003). There were no significant differences in body temperature between sexes (Plummer & Mills, 2010; Himes, Hardy, Rudolph & Burddorf, 2006); this is attributed to both male and female snakes which select very similar microhabitats that can provide them with the necessary heat to increase their body temperature (Schwarzkopf & Shine, 1991).

A species can have active thermoregulation, and/or they can thermoconform depending on the circumstances in which they find themselves (Peterson, Gibson & Dorcas, 1993); however, C. catalinensis showed thermo-conformation, because the body temperature was related to the habitat and season of the year, which was evident in the value close to 1.0 in the regression analysis. Using different microhabitats or performing thermoregulatory behaviors avoids the risk of being preyed upon; in this sense, these rattlesnakes’ behavior increase their chance of survival (Stewart, 1984), since the main predators on Santa Catalina Island are raptors like barn owls (Tyto alba), peregrine falcons (Falco peregrino), ravens (Corvus corax) and red-tailed hawks (Buteo jamaicensis) (Arnaud et al., 2008; Grismer, 2002).

Differences in habitat use by C. horridus with different colors may be due to the advantages that each habitat provides them in order to go unnoticed by predators and prey alike (Reinert & Zappalorti, 1988). This does not happen in C. catalinensis, because there were no differences in habitat use by either dark or light color snakes (Arnaud et al., 2008). The dark snakes are more easily adaptable than the light-color ones, this allows them to absorb more heat, which, in turn, accelerates their metabolism, provides them faster digestion of prey, greater strength, better physical conditions and, therefore, greater reproductive success (Morozenko, 2003). However, dark colorings can also be a disadvantage with respect to predatory risks, since they are more easily visible to predators as well as to their preys (Andrén & Nilson, 1981; Capula & Luiselli, 1994).

There was no difference in body temperature with respect to coloration, and this may be due to 1) their crepuscular or nocturnal habit; for that reason, they do not absorb more or less radiation; and 2) the color variation is related to the color of the ground surface for both snakes, whether dark or light, apparently, they both select thermally similar microhabitats, just as C. lepidus (Forstner, Hilsenbeck & Scudday, 1997).

The thermos-conformity presented in C. catalinensis indicates that body temperature follows fluctuation of substrate temperature; therefore, the number of active snakes can depend on thermal variables such as the surrounding temperature and the relative humidity. Positive correlations were observed in C. catalinensis. Reptiles inhabiting arid areas are more sensitive to high temperatures during dry seasons (Huey et al., 2009), which could have an influence. In dry season, fewer individuals were found. During rainy season more snakes were recorded, which coincides with reports by Avila-Villegas, Venegas-Barrera & Arnaud (2004). For other species such as C. atrox, C. molossus, and C. tigris, more activity was observed during (July-October) in Arizona (Beck, 1995); C. adamanteus showed a higher activity from September to November in Florida (Timmerman, 1995); C. michelli proved to be more active from June to September; and C. cerastes was more active from May to October in California (Moore, 1987).

Crotalus catalinensis indiscriminate the use of different types of microhabitats available, using soil without vegetation cover more frequently during the night or when solar radiation is absent, and the soil is losing heat; this is quite possible because it is more visible to predators. The presence of snakes in shrubbery cover corresponded to 1) maintaining a constant body temperature (Huey, Niewiarowski, Kaufmann & Herron, 1989), it is different in soil without vegetation cover, where temperature variations are greater (Miller & Mushinsky, 1990; Reinert & Zappalorti, 1988), and 2) vegetation helps snakes to avoid predators (Gibson, Smucny & Kollar, 1989).

The choice of microhabitat favors the efficiency of their vital processes such as survival, to seek refuge during periods of high vulnerability (King & Turmo, 1997) or to maintain optimal temperature during warm days (Huey et al., 1989), reducing body temperature while feeding (Nelson & Gregory, 2000).

There are other factors not studied yet, which are probably associated with the use of micro-habitats of snakes such as the presence of chemical traces of prey or its congeners. It is necessary to conduct experiments using thermal gradients, both laboratory and field, to test more clearly how environmental temperature influences the choice of a microhabitat rattlesnake and to explore the effect of the availability of shelters and their influence on the body temperature and microhabitat choice.

Grismer, L. (2002). Amphibians and reptiles of Baja California, including its pacific islands and the islands in the Sea of Cortés. USA: University of California Press.