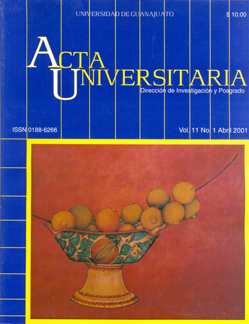 The objetive of this work was to determine if the quality of Guanajuato agaves is equal to the agaves cultivated in Jalisco. A comparative study was made of the sugar content of the agave (A. tequilana Weber) cultivated in both states. Used were data of total reducing sugars (%TRS) and Brix degrees (ºBx) of raw juice samples provided by a tequilera of the region between August and December, 1998 and January and May, 2000. The data were statistically processed, applying an ANOVA analysis and a Tukey test to compare the media and the correlation between °Bx and %TRS was made. In the first period, the media %TRS from the supplier of Manuel Doblado, Gto. was 24.43 ±2.29 and did not show a significant statistical difference (p<0.05) with the suppliers of Los Altos, Jal. In the second period, the media of the suppliers of Pénjamo, Gto. was 26.78±5.96 and was equal statistically to suppliers 4, 5, 6, 7 y 9 of Los Altos, Jal. The correlation between %TRS and °Bx of 0.9621 was significant to a level of 1%. One concludes that, according to sugar count, the agaves from Guanajuato are of good quality and do not present a significant statistical difference with respect to those cultivated by seven suppliers from the state of Jalisco.