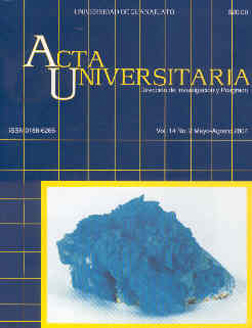 Eating disorders are psychological disorders related to abnormalities withthe eating behavior, being the most frequent anorexia, bulimia andcompulsive eating. Its prevalence has shown a sustained increase in the last years in many countries of the world. The present study derives from an ampler project on consumption of drugs, alcohol and tobacco in the student population; one out of three students of the sample also responded to the A Form questionnaire (n = 810) in which the present report is based and whose objective was to determine the specific characteristics of eating disorders in high school students at theUniversity of Guanajuato. A questionnaire was applied to arandomized, two-phases and by conglomerates, sample. Some results are: the rank of age of the participants was 14 to 20 years (average=15,8 yearsold); 46,5 % were males and 53,5 % females; a significant percentage of students maintain nutritional risk habits (15 % never have breakfast and more than 28 % have only two meals at day); comparing the Corporal Massreported and the perceived one, it was frequent to find alterations in the perception of the body. Among the risk factors, two out of ten students have gorged themselves and one of ten has provoked the vomit with the purpose of losing weight. Although these numbers are smaller than those reported in national studies, they are indicators of the presence of eating disorders among high school students.
https://doi.org/10.15174/au.2004.234
PDF (Español (España))